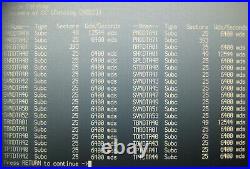 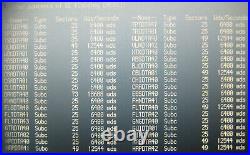 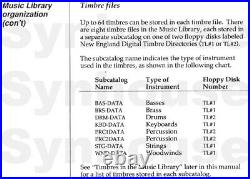 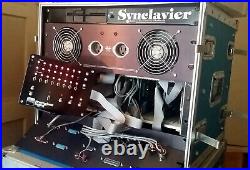 This is an expanded Synclavier Winchester hard drive that has a massively upgraded real-time operating system and is loaded with. Of the entire New England Digital Timbre Library. This is a massive collection of pop and orchestral sounds. It has drums, bass, percussion, cymbals, grand piano, more keyboards, strings, brass, guitars, woodwinds with saxophones and more, and orchestra hits. The New England Digital Timbre Library includes orchestral and pop sounds.

NED advertising referred to this thousand-megabyte collection as "the standard-bearer for sampled musical instrumental libraries". This is a bootable modern (relatively modern, for 50-pin SCSI drives, that is) 3.5 Synclavier SCSI Winchester drive that is loaded with Synclavier sampled sounds and software.

It has all the timbre floppies copied in here, everything. Just the subcatalog "[NED2]" (see photos) has 90 subcatalogs, each with 8 banks of 8 timbres, or 90 Superfloppy disks copied in there!

This also has NED III, but I don't have clear documentation as to what that is. It appears to be only 24 megabytes and could be just some additional sounds that were added on to the existing libraries. In my view, these New England Digital Timbre Library sounds are truly excellent and the best way to get the most out of a Synclavier that doesn't have a huge amount of RAM. The original New England Digital Timbre Library sounds are from November 1, 1985, during the time when a Synclavier would commonly have 1mb or 2mb of RAM, and 4mb was a huge system (that is what the Glen Glenn Sound/Jim Wolvington Synclavier profiled in the September 1986 Mix Magazine Film Sound/sound effects/sound design issue had, 4mb of RAM), they had to be compact to be useful. These were the absolute best sounds available from.

The photos show actual screenshots to show you just a small portion of the contents. There are seven major subcatalogs inside, just two of which are 438. One view in the upper left shows the software main menu.

The next view below that one on the left shows the names of seven major subcatalogs listed together in the top level Winchester catalog using the MONITOR view. All the rest of the different views (going down the left column to the bottom left, then starting again at the top right and going down to the bottom right) show the next level of contents in the seven major subcatalogs using the FORMCOPY view. Each one of those "LSubc" subcatalogs has many more subcatalogs and sounds nested inside it. This is the way of the NED XPL file system. Here's the thing, timbres patch files that map the sounds to the keyboard and set the parameters, etc. Existed only in a file named.

Sounds crazy, but that is how it was, not. Since two files can't be in the same place on any computer with the same name, each one has to be tucked away in its own subcatalog (like a folder on a PC). To access those sounds, you just navigate from the top level directory (W0:) to the library you want, like NED1, then enter BASS1, and so on to get to a. NEWDATA file, and those 64 appear on your A Timbre Directory page, or on the 8 x 8 keyboard button banks if you want to select from there.

You can navigate yourself to the library you want just by using the mouse and clicking on the D. Subcatalog Directory page, then clicking the one you want in that page. There are more system files and utilities that are not shown because they are in an "LSubc" subcatalog. To see the timbre files patch files that map the sounds to the keyboard and set the parameters, etc. Included in this library, see the photo of the scan of a page from the rare ML Music Library manual explaining all the keyboard layouts, and that is just what you will see in the subcatalog "[NED]" (see photos).

This is much more than is listed below. This also has NED III, but I don't have documentation as to what that is. About the Synclavier Software (Real Time Program). This is a bootable W0 system hard drive with much improved software, Synclavier Digital Corporation/DEMAS Release 4.03 for the New England Digital Synclavier Digital Audio System. This version is from September 1997, five years after NED closed down.

Release 4.03 is important because it introduced removable hard drives Jaz, Data Express, etc. As a replacement for tape backups and for the recording media itself, and 4.03 eliminated the ADB EVE Key that was kind of a buggy pain. I absolutely have to use at least this one on some systems and for some types of jobs. Other than that, Release 4.03 was just a slightly reworked version of. Release 4.02 from May 1, 1997, five years after NED closed down.

Release 4.02 is one of the all time best Releases for the Synclavier. And far better than some that came after it. Synclavier 4.02 had a vastly improved SCSI system, which had been a problem in previous Releases (I actually use 4.02 install disk one every day, it can format drives that previous versions can't), and allowed removable hard drives like Jaz, Zip, etc. As the system Winchester or secondary drive, and magneto-opticals as well. It also allowed the formatting of hard drives as optical drives.

I never got into this myself, but composers swear by it because it lets the user sort sounds by instrument/sound category. It was claimed that this Release also allowed the use of 9.1gb drives (actually formatted out to 8.2gb), but I never really confirmed that this wasn't possible before. A super handy thing is that it showed large catalogs and subcatalogs in megabytes instead of NED XPL "sectors", which are confusing and result in huge numbers in these larger drives. See the screenshots to see both in use by the MONITOR utility software (included).

This drive is in excellent condition, configured to work as a main bootable system drive, and is terminated. I checked it myself and took the screenshot photos below. A note about installing this in a newer xx00 style Synclavier Control Unit. This drive can be installed inside the Synclavier tower (Control Unit) itself because this is the correct type of drive and is terminated.

Just a cable from the D24 SCSI card to this drive, that's it, no external terminator or anything else needed. But if you need to connect additional drives externally, it will have to be inline with that cable, or you'll have to change the jumpers to turn the termination off so that your terminator can be the snap-on type outside the machine on the back of whatever drive(s) you are using there. This can be done very easily in the Synclavier 3200, Synclavier 6400, Synclavier 9600, PostPro, and PostPro SD, as they have an internal drive tray (for up to three SCSI devices in some cases), and the hardware mounting can be done with a standard computer store 5.25"-to-3.5" adapter plate or side mounts, or by redrilling the holes in the tray (be sure to remove other drives first or the drill vibrations could damage them), or simply by using a single screw to hold the drive in place recommended only for Synclaviers that always stay set up in the same place. For rack mount internal installation in earlier Synclaviers, such as retrofit upgraded Synclavier IIs, Synclavier PSS, and Synclavier PSMTs, as many of you have seen on custom ordered Synclaviers from Synhouse/Synclav com, much more work is required, as they don't have the mounts, data cabling or power cabling required, and often don't even have the space available, so this is best for those with a lot of hardware and tooling skills. For users of other brands who do.

Have a Synclavier, here is a question and answer that relates to these Synclavier Winchester library auctions. Dear synhouse, Hi, since the item has scsi, can the library be accessed with other scsi peripherals for use with modern computers, or is the item only compatible with a synclavier. No, you need a Synclavier to use a Synclavier sound library. The fact that the Synclavier SCSI-1 style interface is somewhat compatible to the SCSI-1, SCSI-2, and other SCSI interfaces on other computers and peripherals isn't a sufficient common bond and really doesn't matter. I say "Synclavier SCSI-1 style" because NED was making and using their own SCSI drive systems before any SCSI drives even existed in the computer stores.

What matters is that a computer needs to 1 be able to read the file system on any piece of media i. You can't connect a NeXT computer disk to a Windows 7 PC and read it, and 2 a digital audio system sampler, DAW, computer with sound card, etc. Needs to be able to read the digital audio file format. If you don't have a Synclavier, you don't have anything that can play these files, nor even look at the directory.

This works perfectly, this is super clean and collector's choice, as I like to say about the best items I sell. As you can see in the photos, it is touching only proper anti-static packaging and nothing else. Not carpet, not plastic table tops, not sandwich bags. There is NO remaining way to send items like this overseas for less, sorry.

I accidentally undercharged on several items recently. Please see my other listings for other rare NED software, sounds, and manuals that I may have for sale at the moment. The item "Synclavier Bootable PolySampling SCSI Hard Drive withOS+Complete NED TimbreLibrary" is in sale since Saturday, March 20, 2021. This item is in the category "Musical Instruments & Gear\Pro Audio Equipment\Synthesizers". The seller is "synhouse" and is located in Los Angeles, California. This item can be shipped worldwide.